Climate change, melting ice, mining of raw materials as well as criminalisation and human rights violations against indigenous communities: The STP supports indigenous peoples so that they can exercise their rights and protect the Arctic as a habitat and ecosystem.

As an ecosystem and habitat, the Arctic is in danger

The Arctic plays a central role in the natural balance on Earth. This region includes parts of Norway, Sweden, Finland, Iceland, Russia, Greenland as well as the USA (Alaska) and Canada. The landscape is characterised by ocean, snow and ice, by wetlands, fjords, islands and by mainland with vast coniferous forests, tundra and permafrost. Despite the inhospitable climate, the Arctic is home to fish, birds and mammals. Around 400,000 members of indigenous communities live here – that is about 10 per cent of the Arctic population. Not only they, but all of us depend on the future of the Arctic: when the Arctic ice melts, the sea level rises. The permafrost stores greenhouse gases in the soils, which would rise into the atmosphere in the event of warming. 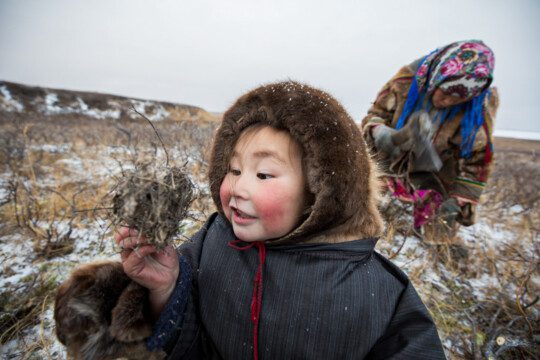 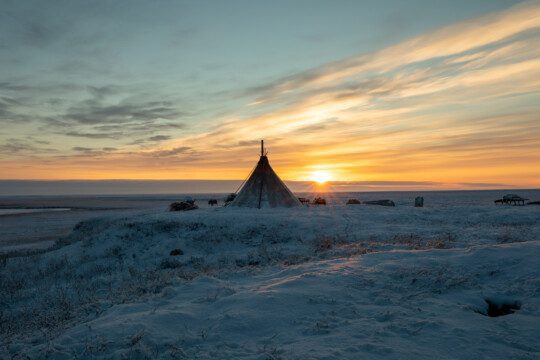 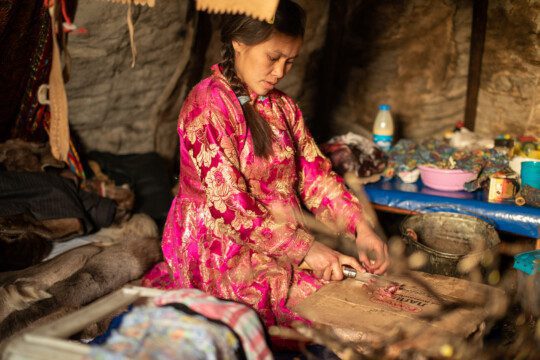 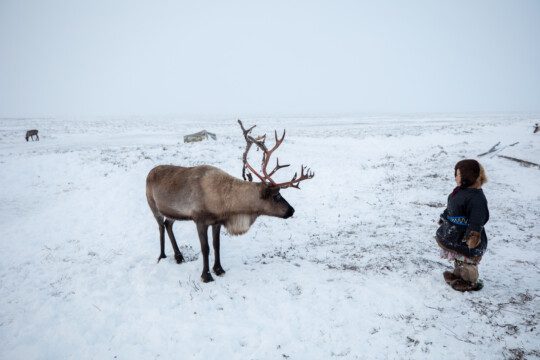 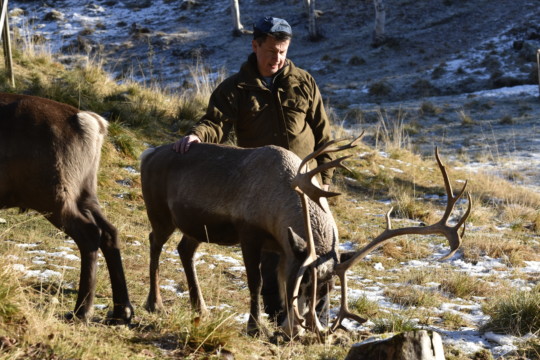 The Arctic is endangered: According to the latest findings, the Arctic could be ice-free in summer as early as 2035 and forest fires will continue to increase. If the permafrost thaws, this will upset the ecological balance of this region. The Arctic is also endangered because it contains important raw materials such as copper, nickel, oil and natural gas. With the melting ice, a real run on these raw materials has started: Russia, for example, wants to invest 210 million euros in the development of new oil deposits, and in the USA, the Trump administration released environmental protection areas and indigenous territories in Alaska for oil and natural gas production. Hopes are now pinned on the newly elected President Joe Biden, who has appointed an Indigenous woman as Secretary of the Interior and has publicly spoken out against oil and gas exploration in the Arctic. 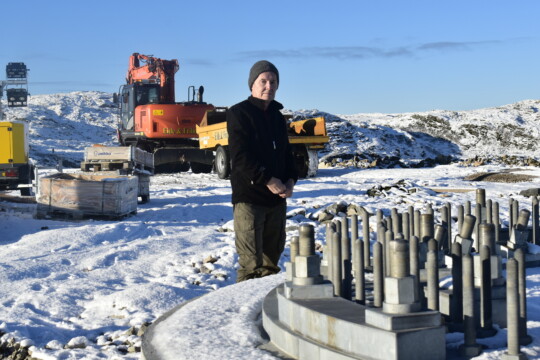 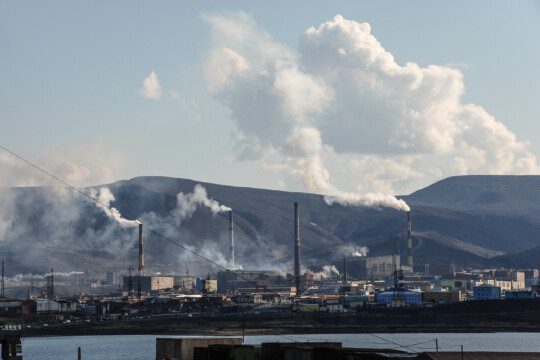 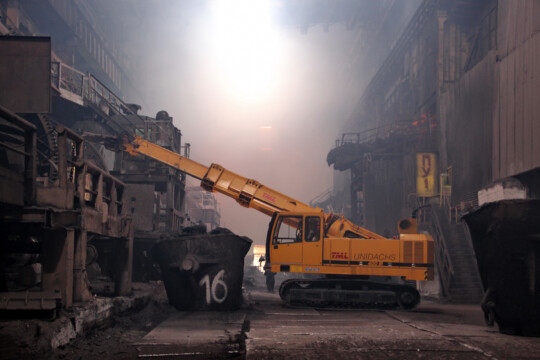 Arvid Jåma at the construction site of the wind turbine in Storheia. Photo: STP
Norilsk, Russia: A large amount of harmful emissions significantly impairs the environment. Photo: Clubclose
An excavator in the smelting hall of the copper plant of the Russian nickel producer Nornickel. Photo: Alexander Chizhenok

The hunger for raw materials and climate change are destroying the habitat of indigenous communities such as the Sami in Norway or the Nenets in Russia. Hunting, fishing and reindeer herding are endangered, rivers are contaminated and entire landscapes are cut up by major projects. In many cases, the indigenous communities receive hardly any support in the struggle for their rights and the preservation of their habitat. On the contrary, in Russia in particular, indigenous activists experience massive threats and become victims of repression by the government when they campaign for their territories to be respected.

This is where the STP campaign comes in: Help us to stop the destruction together with the indigenous communities and to fight for an environment worth living in – both for them and ultimately for us!

How the STP supports indigenous communities in the Arctic – please help!

The STP supports indigenous communities in the struggle for their living space, and the observance of their human rights and self-determination. In our campaign, we focus on the following priorities and advocate for corresponding demands:

Join us in defending people and nature in the Arctic! Thank you!

Example: the Repparfjord copper mine in Norway

The Repparfjord is a small fjord in the northern Norwegian Finnmark. Now the mining company “Nussir ASA” is planning to operate two copper mines at the Repparfjord. From the point of view of the STP and the Sami communities, the project endangers the environment and Sami rights: in the eyes of the affected Sami, the operation of these mines would endanger traditional reindeer herding on site – and thus their livelihood. In addition, the residual waste from the mines, contaminated with chemicals and heavy metals, would be poured into the Repparfjord, threatening the fish stock and local fisheries.

According to the STP’s research, Credit Suisse managed 20.6 per cent of the shares in Nussir ASA as a nominee shareholder until 2019. Thus, the big bank managed the second largest shareholding in the company behind the Norwegian company Monial AS. The affected Sami communities, the Sami Parliament and the STP called on Credit Suisse to relinquish its role as nominee shareholder until an amicable solution is found with the affected Sami. In 2020, Credit Suisse withdrew from the project as a nominee shareholder. This is a partial success: with the withdrawal of Credit Suisse, the identity of the actual investor is finally being revealed. They are now officially listed in the investor directory of Nussir ASA under their own name and thus have to take responsibility themselves.

Despite Credit Suisse’ exit, the mining project is not yet off the table. Nussir ASA recently signed a letter of intent with the German copper giant Aurubis. Thus, the realisation of the project has taken another step forwards. The Sami communities are currently fighting the project with all political and legal means and are in talks with Aurubis. The STP supports the concerns of the Sami and will closely follow this case.

These are the specific demands of the STP and the affected Sami communities:

In Central Norway, a huge wind farm was built on the Fosen Peninsula. As one of the affected areas, Storheia is of great importance for the local Southern Sami: The Storheia area provides around 44 per cent of the winter grazing land for the indigenous reindeer herders of the Southern Sami. Because of the project, this grazing land has now disappeared – the reindeer avoid the wind farm. This has drastic consequences for the Southern Sami. The loss of this large grazing area means that in the long term they will have too little winter pasture for their reindeer husbandry. As a result, the last remaining herding families will have to reduce or completely abandon their traditional trade – and with it their culture. For this reason, the Society for Threatened Peoples believes that the project violates international agreements and human rights conventions.

The project was implemented by the Fosen Wind DA consortium. The owners are the Norwegian state-owned energy company Statkraft and Nordic Wind Power DA, a consortium of European investors founded by Credit Suisse Energy Infrastructure Partners AG. One of its members is the Bernese energy company BKW, which holds an indirect 11.2 per cent stake in the project. In 2020, Credit Suisse handed over its shares to the Swiss investment firm Energy Infrastructure Partners.

What the STP does:

The Society for Threatened Peoples has visited the affected reindeer herder families in Storheia and supports their demand for co-determination in the construction of the wind power plant. In December 2018, it organised a trip to Switzerland for a delegation of the Southern Sami so that two of the affected people could hold talks with the investors BKW and Credit Suisse, and present their concerns in person. The STP then filed a complaint against BKW with the National Contact Point (NCP) for the OECD Guidelines for Multinational Enterprises.

These are the demands of the STP and the affected Sami communities:

More corporate responsibility in the future

The STP achieved an important success in the summer of 2021: As a result of the mediation process with the STP, BKW is now anchoring the principle of free, prior and informed consent (FPIC) in its internal guidelines. Thanks to this improved due diligence, human rights violations should no longer occur. Should they nevertheless occur, BKW will be able to withdraw from the business relationship thanks to new exit clauses. In addition, it will establish low-threshold complaints mechanisms at the project level.

At the same time, Norway’s highest court ruled that the wind farm in Storheia poses a direct threat to the persistance of local reindeer herding. It therefore ruled – in favour of the affected Southern Sami – that the turbines violated their right to culture according to Article 27 of the UN International Covenant on Civil and Political Rights. Therefore, the court retrospectively declared the wind power project’s operating license invalid. The Norwegian Ministry of Energy must now decide whether and how the plant will be dismantled. The ruling sets a precedent in Norway and thus influences further wind power plants as well as raw material projects on reindeer pastures.

The ice melts, the demand rises

The wind farm in Storheia shows: Also the so-called “green” economy must respect human rights. The energy transition must not be at the expense of indigenous communities. Due to the run on raw materials in the Arctic, which are also needed for renewable energies, this issue is becoming increasingly important. The STP stays tuned. 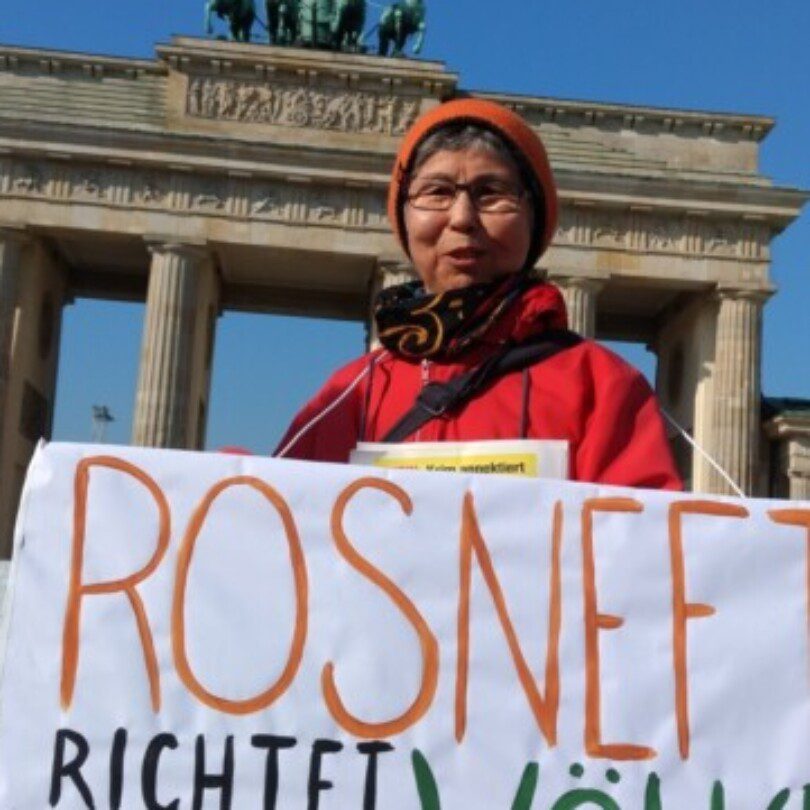 “Without all the variety provided by our different minorities, our Earth is nothing”

Tjan Zaotschnaja
intermediary and human rights activist
“Without all the variety provided by our different minorities, our Earth is nothing” 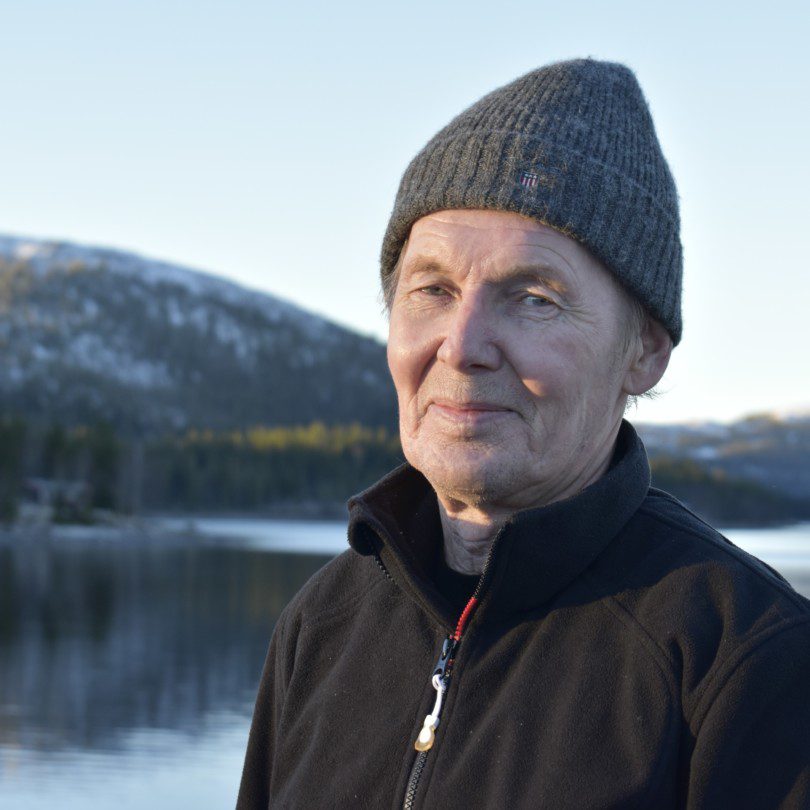 “Reindeer breeding is the heart of Sami culture”