No Business Without Human Rights

The STP addresses the financial involvement of the two large Swiss banks UBS and CS in the controversial North Dakota pipeline project.
Photo: No Spiritual Surrender

The Society for Threatened Peoples (STP) and the Swiss bank Credit Suisse concluded in the middle of october 2019 a mediation process, facilitated by the Swiss National Contact Point (NCP), in the context of the OECD Guidelines for Multinational Enterprises. Credit Suisse has resolved to incorporate the protection of indigenous communities’ rights into its internal guidelines on project financing. The STP welcomes this important step as a clear signal for the entire financial sector. However, it expects CS, as well as the other financial institutions, to extend this policy to all domains, such as company financing and stock broking. In addition, decisive action is expected in the event of breaches.

The Swiss banks CS and UBS must publicly unambiguously state their position and act as creditors and administrators of shares of the consortium Energy Transfer Family, which is responsible for the construction of the controversial North Dakota Access Pipeline, when it comes to human rights violations and environmental damage. The Society for Threatened Peoples (STP) has therefore lodged a complaint at OECD National Contact Point for human rights of Switzerland and calls on the two banks to waive their business relations in future if human rights violations are committed on site.

The construction of the oil pipeline in the Standing Rock Reserve in North Dakota has triggered massive protests since April 2016. The indigenous Sioux, whose land is affected by the project and who fought against potential environmental damage, received worldwide support. The large Swiss banks UBS and CS are significantly involved in the controversial North Dakota Access Pipeline project. In three out of four participating companies of the Energy Transfer Family – Energy Transfer Partners, Energy Transfer Equity and Sunoco Logistics Partners – Credit Suisse manages equities with a total value of over one hundred million and UBS with a value of half a billion Swiss francs. In addition, both CS and UBS have granted credit lines of several hundred million Swiss francs to the three companies mentioned above. In talks between the STP, Greenpeace and the sustainability departments of both banks, the latter have repeatedly emphasized their awareness of the problem. Furthermore, both banks supposedly had drawn up guidelines to exclude investments and services related to human rights violations or massive environmental damage.

The conflict in Standing Rock shows, however, that in practice these guidelines have large gaps and thus ultimately become a farce. Although the STP filed a petition with some 6,500 signatures with the banks in December 2016, it was announced in January and February 2017 that CS had intensified its business relations with the companies involved against their better judgement: not only did CS issue further credit lines, it also assumed various administrative activities in favour of the construction consortium. Yet this could be dealt with in a different manner: in the meantime, other banks have sold their shares, sold the loans or at least publicly distanced themselves from the project.

On the occasion of the General Meeting of Credit Suisse, the Society for Threatened Peoples (STP) once again drew attention to the fact that the bank plays a leading role in financing the controversial North Dakota Access Pipeline and the construction consortium in the US. Because CS did not comply with the requirements of the STP and did not show any genuine willingness to negotiate, the STP filed a complaint with the National Contact Point (NCP) on 28 April 2017 in relation to the OECD Guidelines (domiciled at SECO).

The STP demands from the banks:

The controversial petroleum pipeline project in the state of North Dakota, in the region of Standing Rock, a reserve of the indigenous Sioux people, has triggered massive protests worldwide since April 2016. STP shows solidarity with Standing Rock and draws attention to the situation through an online petition.

The controversial petroleum pipeline project in the state of North Dakota, in the region of Standing Rock, a reserve of the indigenous Sioux people, has triggered massive protests worldwide since April 2016. Despite the icy cold weather, thousands of protesters, including many indigenous people, water activists and climate activists, occupied the construction site in winter 2016/2017 and blocked the completion of the almost 1,900 kilometre-long pipeline. They fear massive damage to the environment in the case of a leak and fight against the destruction of indigenous sanctuaries. As a result, the security forces brutally attacked the demonstrators with tear gas and water cannons; over 700 people have been arrested since the beginning of the protests. The responsible state land administration finally decided to call a halt at the beginning of December and decided to suspend the approval for the problematic last section of the project until a comprehensive environmental study had been completed and further clarifications with the indigenous people concerned had been made.

The president of the US, Donald Trump, however, pursued a different policy. Barely a week in the office, Trump asked the relevant authorities in a memorandum to stop the ongoing environmental study immediately and to push the project through as fast as possible. Under heavy political pressure, the authority issued the necessary authorization on February 7, despite ongoing legal proceedings. On February 13, another setback followed, when the responsible judge ruled that for the Standing Rock Sioux there was still no danger from the pipeline, as long as it was not in operation and the construction work could therefore be continued. This once again provoked global protests and resistance to the unsustainable conditions. Despite massive international protests, construction work continued and the activists had to withdraw.

Since autumn 2016, the STP has shown solidarity with Standing Rock by addressing the financial involvement of the two large Swiss banks UBS and CS in the controversial pipeline project. In order to draw attention to the situation, the STP has published various press releases in recent months. With the support of various actions in Bern, Basel and Zurich together with partners such as Incomindios, Fossil Free and individual activists it handed about 6,500 signatures of an online petition over to the two banks in December. 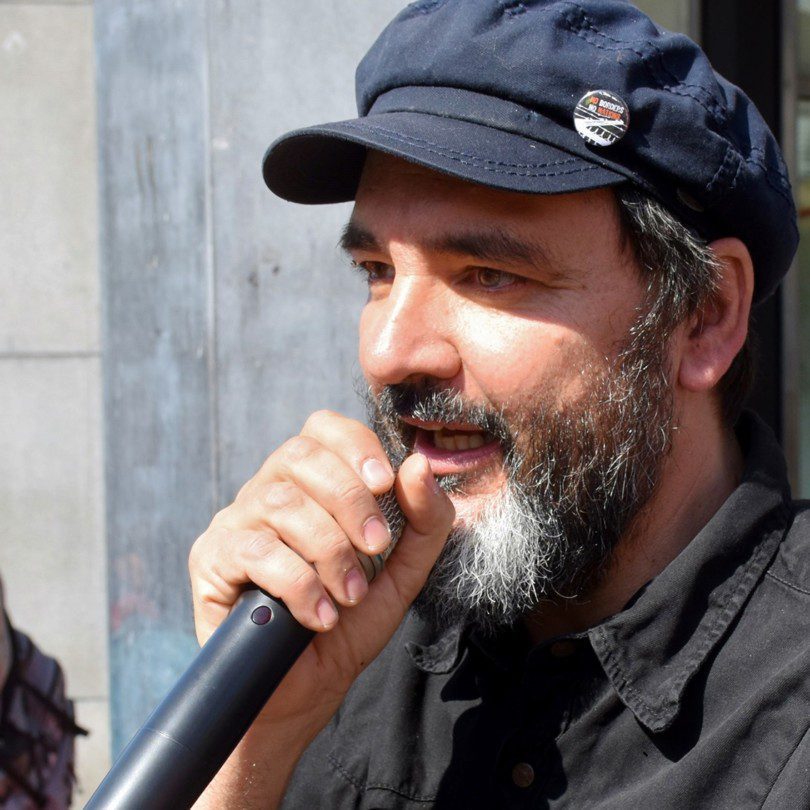 Actares is an organization that confronts listed swiss companies by advocating for responsible economy. This includes respecting the rights and habitats of indigenous peoples. Special attention is given to banks and insurances, which by means of providing capital, enable the implementation of projects such as the construction of the pipeline through the Standing Rock-Reserve.